Gastroesophageal reflux disease (GERD) is a condition where the stomach acid leaks into your food pipe (esophagus) causing a burning sensation in your chest and other associated symptoms.

Everyone experiences acid reflux once in a while after a heavy meal or when lying down. However, people with GERD experience acid reflux on a regular basis, often more than twice a week, and it could lead to serious health concerns and negatively impact quality of life.

GERD occurs as a result of the weakening of the lower esophageal sphincter (LES) which is a muscular ring that connects the lower part of the esophagus to the stomach. The function of the LES is to prevent the backing up of food and stomach acids into the esophagus, but when the sphincter is weak, it fails to close tightly enough resulting in acid reflux. The other common way it occurs is due to the LES opening too frequently. 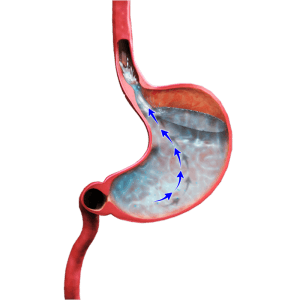 Factors that may contribute to the development of GERD include:

What are the Symptoms of GERD?

You may experience the following symptoms:

What if GERD is Left Untreated?

If left untreated, GERD can cause bleeding, perforation, ulcer, scarring, or precancerous changes in the mucosal lining of the esophagus.

To diagnose your condition, your doctor will discuss the frequency of your symptoms as well as the aggravating and relieving factors and perform a physical examination. The following diagnostic tests may be ordered:

Endoscopy: A fiberoptic camera is introduced through your mouth allowing visualization of the esophagus to look for signs of GERD. This is a day procedure.

Esophageal Manometry: It is a method of testing the strength and efficiency of oesophageal contraction. A thin tube is passed through your nose down your throat and into the esophagus. The pressure on the tube is measured as you eat different types of food.

pH Study: It is performed to check the acid levels in your esophagus

Impedance Testing: It is performed to check for non-acid reflux in your esophagus

The three progressive stages of treatment of GERD are:

The first line of treatment would be lifestyle changes such as:

If lifestyle changes do not resolve symptoms, you may have to use medications such as:

If medications and lifestyle treatments fail to resolve your GERD symptoms, surgery should be considered. Your doctor offers the latest surgical treatments such as robotic surgery and laparoscopic anti-reflux surgery to ensure positive outcomes and quick return to activities of daily living. This is usually done through keyhole incisions and you have a short hospital stay, usually just overnight. You can return to work after one week and will have a modified diet for 4 weeks post-op.