What is Hiatal Hernia?

Hiatal hernia is a condition characterized by a protrusion of the upper part of the stomach through the diaphragm. The diaphragm is a muscular layer present between the abdominal cavity and the chest cavity and aids in breathing. It has an opening called the hiatus through which the esophagus or food pipe passes to reach the stomach. When the stomach protrudes upwards through the hiatal opening, it is called a hiatal hernia. 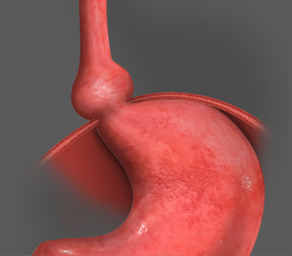 There are two types of hiatal hernia:

Hiatal hernia may be caused by:

Your doctor will review your medical history and symptoms and order certain diagnostic tests such as:

In most people, hiatal hernia produces no symptoms or mild symptoms. Few present with severe symptoms. The treatment methods vary based on the severity of the condition and include:

Your doctor will suggest over the counter medications such as antacids, proton pump inhibitors and H-2 receptor blockers that helps to neutralize and prevent acid production in stomach and esophagus

Surgery: If conservative methods are found to be ineffective, surgery will be recommended.

Laparoscopic surgery is usually performed. This is a minimally invasive technique where your surgeon will make five or six small incisions on the abdomen through which a laparoscope which is a thin flexible tube with a camera and light attached to its end will be inserted along with other surgical instruments. The camera captures images which are displayed on a monitor to help your doctor guide the instruments while performing surgery. Surgery may include: