Splenectomy is the surgical removal of spleen, a large organ located in the upper left part of the stomach that contains macrophages, specialized cells that fight against the foreign bodies. Splenectomy is indicated in splenomegaly, a condition of enlarged spleen. Patients with splenomegaly may or may not exhibit the symptoms and will be diagnosed by the physicians by physical examination or radiological diagnosis. The common symptoms include abdominal pain, hiccups, unable to have a large meal, weakness, fatigue, frequent infections, and severe bleeding. 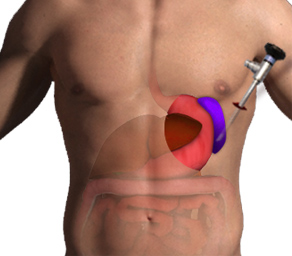 Splenectomy may be performed by open surgery or laparoscopic procedure.

Risks and Complications of Splenectomy

Some of the complications include bleeding, wound infection, pneumonia, and injury to other structures.